This post is made in conjunction with Dr. Rick West’s Foundations of Instructional Design course at Brigham Young University.

In preparation for next week’s discussion on educational gaming, we were given the assignment of finding an educational game, playing it, and then reflecting on the process. Since, I don’t have any educational board games at home (and I loathe the moral relativism of Apples to Apples), I did a bit of digging around the internet and the iOS app store and I eventually found two games which were made from the same developer:  Dan-Russel Pinson. The games are that aptly named Presidents vs. Aliens and Stack the Countries.  Now while I wasn’t planning on reviewing two games, I chose to evaluate both of them because the model on which they are based are fairly similar.

Both Presidents vs. Aliens and Stack the Countries seem to be very similar in terms of their purpose, structure, and game play.  In PVA, players are presented with a Breakout-style puzzle filled with alien heads.  In order to shoot get rid of the aliens, they need ammunition in the form of presidents heads.  They receive these heads by correctly answering presidential trivia questions.  Once they answer a question right, the player is then able to shoot the presidential head toward the alien.  In order to complete any given level, the learner may have to answer several questions correctly to get the tools necessary to achieve the objective. 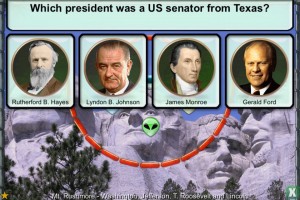 Answering questions in Presidents vs. Aliens

Now while the gameplay in Stack the Countries is not an exact mirror of PVA, the goals are very similar.  Namely that the student must complete trivia questions in order to get access to play the actual game.  In this case, the learner is answering questions about world geography in order to get countries that they can then stack in a pile.  Once the countries are stacked to a designated threshold, the learner completes the level.  What is unique about this stacking process, however, is the fact that countries are given to the player in their to-scale size (ie Canada is really big, and Barbados is really small), and that there is a physics engine which determines if countries can stack on top of each other or topple off of the platform. 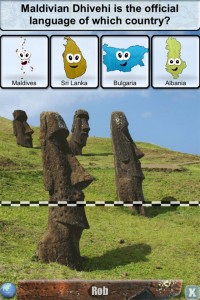 A question in Stack the Countries.  I actually got this one wrong. 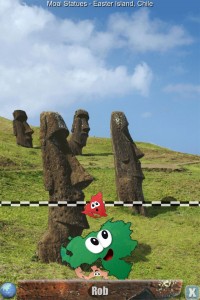 Making an attempt to stack 3 countries

Before laying out any particular criticisms, I should note that I am a 33-year old man and am probably not the target audience for either of these games.  I’m assuming that the target age of these games is probably somewhere around middle school — and it would be interesting to see tween views on the game, but since I only have a 2 year-old and a 3 month-old, my views will have to do.

It is evident in looking at both of these apps, the model is strikingly similar.  In both games, play acts as an extrinsic motivation (It reminds me of computer time that a teacher would offer to a student if they do their work). The learner must complete the learning task in order to engage in the more playful task.  Now while I feel that a lot can be gleaned from the educational portion of the game, I worry that by having such a dichotomy, that the learner will see the educational portion as the necessary evil in order to get to the part that they want to do.  I feel that this tends to be a recent issue in the so-called gamification of learning.  We rely too much on the extrinsic motivation, and assume that will be enough for our students to be successful.  More focus should be given to make the learning intrinsically motivating.  I think this can be done by integrating the educational portion more into the game play.

How these games measure up

In order to further evaluate these games, we can use criteria from Shute, Rieber, & Van Eck (2012).  They give 5 guidelines for educational games. These guidelines are: 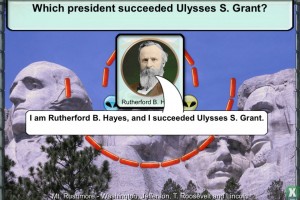 Feedback in Presidents vs Aliens

I didn’t intend the purpose of this post to be to lay into Dan-Russel Pinson for the work that he’s done, but rather it was intended as a thought exercise for myself.  While there are many games out there that claim to be educational, we need to evaluate how the play elements are being incorporated with the educational elements.  If we just tag the educational elements on, our students will gradually disengage, as I saw myself doing with these games.  If we can provide immersive experiences that match educational goals to play goals, I think that we can be more successful in drawing students into these experiences.