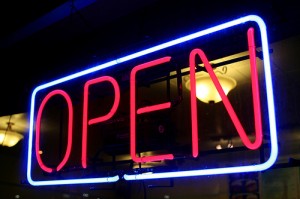 This post is in conjunction with David Wiley’s MOOC “Intro to Openness in Education”.

This week in “Intro to Openness in Education” we learned a bit about the evolution of open content.  Beginning with the “free” and “open source” software movement and later culminating in the idea of “open content” in the late 90s.

As an introduction to the idea of open source software, we waded through Eric Raymond’s “The Cathedral and the Bazaar”.  While much of the technical details of his paper went over my non-developer head, I found many of the principles being pretty on point with the collaborative environment of software development today.  I think one of the most difficult things for me, in not being a developer, is really understanding the significance of the difference between something being free and something being open source.  In my digital workflow, I enjoy many of Google’s tools: Calendar, Google Docs, and Gmail — in reality, I have no idea if these software packages are open source.  I enjoy using them because they are free and they are conducive to “sharing”.  My hope is that Google will continue to encourage this type of sharing through the products that they use.  If their software is not open source — I guess I run the risk of it eventually being shut down or put behind a pay wall (which I’ve heard they’ve done for Google Apps for business), but that is a risk that I am willing to take.  I feel that open source software is more significant to developers.  They are the ones who have the skills to contribute to such projects, and I can only hope that they can then take those projects and make them meaningful to me as an end-user.

As for open content and open licensing, these are things that I have more strong beliefs in.  They are an evolution of some of the principles that were espoused in the open source movement, but the content is more accessible and reusable to the end-user.  Open content is cultural objects for which the end-user can perform the 4 Rs on: Reuse, Revise, Remix, and Redistribute.  The more freedoms that the creator of the object gives to the end-user in the performance of these activities, the more “open” it is considered. While I believe in open content as a principle, I still have a few reservations in its actual practice.  Some of these come from my own use of these in classroom situations.

I think that quality has always been a concern in the use of openly licensed products.  I know that this has been a concern for some instructors in adopting open textbooks (I actually haven’t had too much experience in using open textbooks, so I can’t make a judgement call), as they figure free material can’t be that good.  I have seen the quality problem more significantly in another realm: music.  In my classes (I teach video production), I require my students to use material that they have either created themselves, or material that is licensed through Creative Commons.  Students are able to shoot their own video, but they have a hard time finding good music for their projects.  Music licensed under Creative Commons is typically produced by amateur musicians or Nine Inch Nails.  This results in their being a lot of bad music out there, and students can typically spend hours scouring through the Creative Commons section of Soundcloud to find a track that matches the quality of their video.  With many artists wanting to make money from their music, they are hesitant to openly license their songs.  What can be done to encourage more musicians to openly license their songs?

I recognize that I am partly to blame for this, but I find that my students still think of Creative Commons content in primarily monetary terms:  they use it because it is “free”.  I get questions like “Rob, what is that site that has the free music?” “What is the site where I can find those free photos?”  When students are rushing toward a deadline, they are not thinking about what music they can find that was created by an artist who wants to share the music that he created, they are thinking about where they can get that content for free.  Creative Commons is a system that frees us up to share content, however, the receiver is often only thinking about how much they are paying for that content.

Overall, I believe in these ideals. I want more people to use and practice these types of sharing, yet as of right now I have a few reservations about the implementation of licensing systems.  Have you had any similar problems?  Have you struggled with the quality of openly licensed material?  I welcome any thoughts and comments that you have.

Here is a mind map that I created to connect some of the ideas that we talked about in class this week.

Create your own mind maps at MindMeister